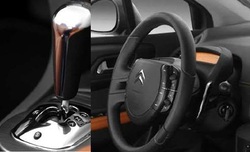 This highly driveable engine boasts a range of advantages. Electro-hydraulic gearbox control makes for smooth, fast gear changing.  At the same time, automated gear and clutch management cuts fuel consumption by between 3% and 5%, compared with a conventional manual gearbox.

This new gearbox therefore provides a real alternative to manual and automatic transmissions, not only in terms of driveability and comfort, but also in terms of fuel economy and a particularly attractive customer price.

By means of automating gear changes and clutch control, this new gearbox obtains a reduction of fuel consumption on the order of 3 to 5% in comparison to a conventional manual gearbox. Fuel savings are boosted by the presence of a 6th gear.

Due to its particularly fuel-efficient engine, the C4 HDi 110 DPFS with the six-speed electronic gearbox system thus brings fuel consumption down to 4.5 litres per 100 kilometres in a combined cycle, with CO2 emissions of 120 grams per kilometre.

The six-speed electronic gearbox system offers outstanding user comfort and responsiveness to the driver’s commands. Its electro-hydraulic control system ensures smooth and lightning-fast gear changes in a wide range of transmission ratios, which makes driving with this gearbox particularly pleasant.

The new gearbox permanently adapts to the driver’s behaviour and reinforces his driving sensations in sports mode, which makes gear changes even faster. It also offers him peace of mind and driving comfort with the hill-hold control and easy acceleration dosage when manoeuvring, particularly in reverse. 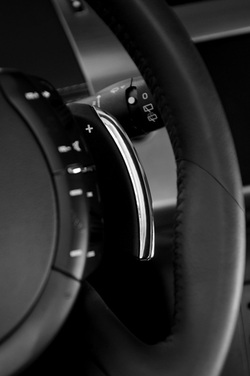 The electronic gearbox system gives the driver a choice between two driving modes: 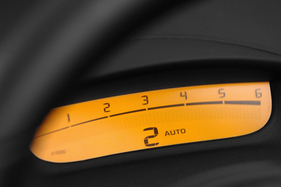 Stress-free driving in automated mode
In the automated mode, gear changes are managed electronically in order to optimise driving comfort and fuel consumption.

This mode is activated by placing the lever in position A on the shift gate. If the driver opts for this driving mode, the AUTO symbol is displayed on the instrument panel, together with the gear engaged.

The gearbox control unit then selects the gear that is best suited according to the auto-adapting shift patterns that are determined as a function of the driver’s behaviour, the road type, engine rpm, vehicle speed and grip conditions.

The system thus prevents situations in which engine speed is too high or too low and proposes an economical shift pattern aimed at lowering fuel consumption. Optimised gear change management produces fuel savings on the order of 3 to 5% in comparison to a manual gearbox, depending on driving cycles.
However, certain specific situations are immediately recognized and taken into account by the gearbox. These include holding the engaged gear in phases of sustained acceleration, downshifting when the car is re-accelerating and holding the gear or downshifting to assist the motor brake.

If the driver wants to take control of the gearbox while driving in automated mode (for instance in an emergency situation or while overtaking), he can do so immediately. He merely needs to touch one of the paddles, and his shift request is taken into account by the gearbox. If no additional manual command is issued by the driver during a short period thereafter (approx. 20 seconds), the gearbox switches back to automated mode 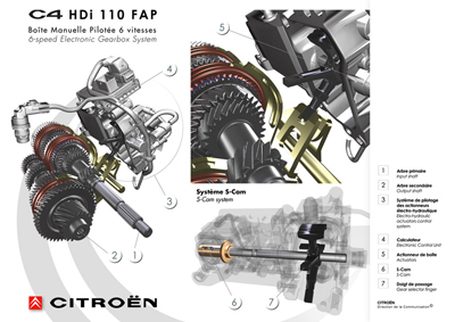 A sport mode for even more responsiveness
The six-speed electronic gearbox system of the C4 also offers a sport mode. This mode, which is available with both manual and automated operation, constantly favours fast gear changes. The total time required for shifting is thus brought down to 0.4 seconds in manual mode and 0.5 seconds in automated mode.

In automated mode, the sport mode is obtained by implementing specific shift pattern: upshifts and downshifts are triggered at higher engine speeds than in normal operation.
The sport mode is activated by the S button on the shift gate. Once selected, an S is displayed on the instrument panel.

The Exclusive Trim is only available with the EGS since launch.

In 2010 saw some improvements on the Picasso's engines including the EGS models.